The Women Goat Herders of Hadhramout

Hadhramout is known as the cradle of mankind. Here, archaeologists have discovered evidence of ancient transitions from hunting and herding to irrigation agriculture, dating back 5,200 years ago or more. Herding is still a very important part of Hadhrami life. Especially for Bedouins and rural dwellers. It is mainly goats and a few sheep that are kept. In Hadhramaut, with Bedouins - tasks between men and women are clearly defined and strictly divided; the job of tending, herding and caring of/for goats is exclusively left to women. It is women, mainly young, unmarried women, who are most responsible for the herd. This responsibility needs much hard work, all day long. Everyday. Men could/would not have the patience and the tenderness required for this. 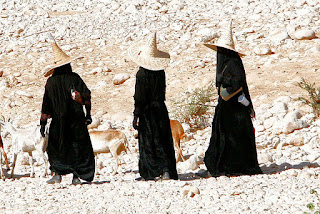 Any one who has visited Hadhramout, visited Wadi Hadhramout and Wadi Do'an in particular, would most likely have seen goats being herded by women. Some times a single woman and some times more, can be seen with their herd. Flocks of goats, can be seen in fields, valleys, over mountains - being herded by women. Some times, little girls, or old women can also be seen herding. Normally, the women leave their homes, with the goats, after sunset. They carry with them: water in a goat-skin-water-container, which easily helps in keeping water cool; some bread or mainly rice; some dried-salted-shark-meat; some tea leaves; a matchbox; and utensils to cook. 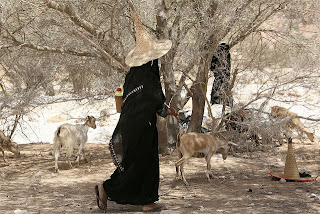 Almost all these women in the Hadhramout and Do'an valleys are dressed - in black; those on the Highlands and other parts of Hadhramout, prefer black mixed with some colors. They are veiled, gloved and having on tall, straw pointed hats - known as modhalla or by some ghomama (both mean 'umbrealla'). These special hats, being as high over the head as they are, wide on all sides and made of date palm reed straw, are very suitable for keeping the women cool however hot it is. Most of these women herders also have socks on their feet. Depending on how much there is for the goats to eat on land where they move, the goat herders can walk any thing from 8 to 15 kilometers (about 5 to 10 miles) a day, grazing their flocks. The goats eat while moving. The herders would stop at midday to pray, make lunch and rest. They may again take another short rest later in the afternoon. They have to make sure that by late afternoon, they are close to their homes and before sunset - they have to be back home with their flocks. 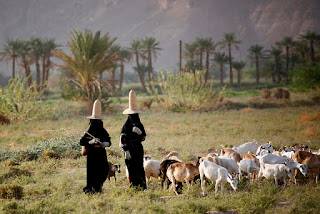 Visitors to Hadhramawt wonder - how can these women dress this way when it so hot? The hats help in keeping air over the head and keeping their heads cool; and the sides of the hats, shade them; the gloves and the socks help in keeping the women's hands and feet not to crack and stay soft. While the complete body cover, helps in protecting the women's bodies from heat and dehydration. 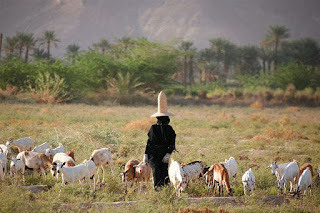 This keeping, tending and herding of goats in Hadhramout is an art. Is a skill. Having watched these women, including relatives, many times with their goats, I can not help but have the highest admiration and regards for them. It takes no ordinary woman to perform this job the way it is carried out by Hadhrami women. The love, the tenderness and the care they have for their flocks is incredible. 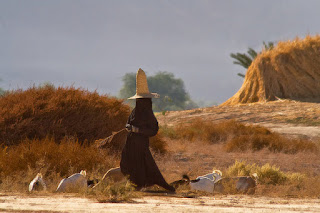 However many goats they have in their flocks - some times numbering in the hundreds - the woman or women attending them would know each of them. And she would attend to each of these goats in a most special and caring of ways. Some of the goats are given names to pamper them; and when little-ones are born, it is when these women give and show their greatest care and love - cuddling the kids and doing all they can to make them comfortable and secure. The goats are never hit and no cruelty is ever shown to them or inflicted on them. When in fields, in valleys, over highlands - the women use that great bond between them and the goats to direct their flocks as they want. The goats actually 'listen' to them and even know when instructed to stop or when to cross roads. The flock incredibly know which fields or places are off limits to them. 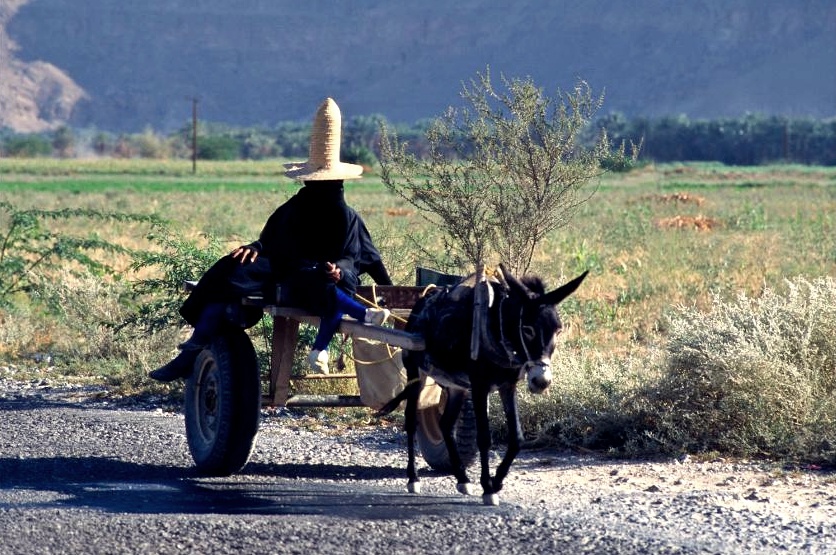 It should be noted that, many if not most, Hadhrami women who herd goats and who work in fields, are literate. They are also are exposed to the outside world through the over 1,000 TV channels that are received by satellite dishes. Most houses in Hadhramout (even Bedouins') have these satellite dishes on top of the roofs of their houses which freely receive these many channels; for most of these women goat herders and field workers, one of their most preferred past times is to sit and watch the many TV channels. And they, like all Hadhrami women, love gold, henna and oud. 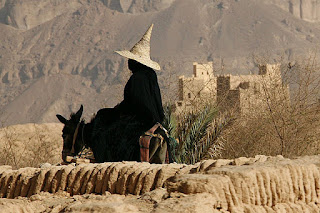 Most of these women would get very irritated, and some times very angry, when parochial tourists - from foreign countries in particular - photograph them. They know what it means. They even know about zoom cameras. I recall, once, some nieces of mine who some times herd goats and work in fields - asked me why 'these nasara' (Europeans or other Westerners) - take photos of them. They know that the way they dress attracts attention, but they don't understand how people from foreign lands would go about taking photos of women without their consent. They pointed out to me - how would these tourists feel if people from our part of the world go and take photos of their women folks in rural areas or in the countryside or in remote suburbs without having the consent of the women? One of them quipped saying that - if it is I going around in Germany and taking photos of women in their countryside, I most likely would be promptly arrested and maybe even accused of terrorism. 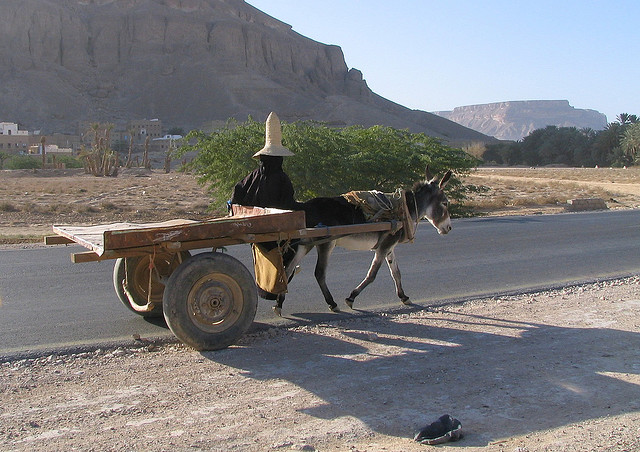 I recall, once, years ago, there was this Englishman who I worked with doing some field work in Hadhramout. He had a powerful zoom camera; his photos of Hadhramawt's landscape were some of the best I have ever seen. On returning to camp one evening, as we were having dinner, he said he had seen two of the most beautiful women he had ever seen. Surprised, as we very rarely saw women out in the remote fields - I asked him where he had seen them. He said that, that afternoon as he was on top of a ridge, two Bedouin goat herders had taken rest and lunch under a tree; as he was far away and above, they didn't notice him. The girls took away their hats, veils and scarves. Using his lens, he could easily see their faces. I asked him if he had taken any photos of the women; he looked at me rather annoyed - saying that he would never infringe on anyone's privacy like that; and that - he took less than a minute gazing at them. You have to give it to the British for being courteous and respectful of other people's cultures and traditions. 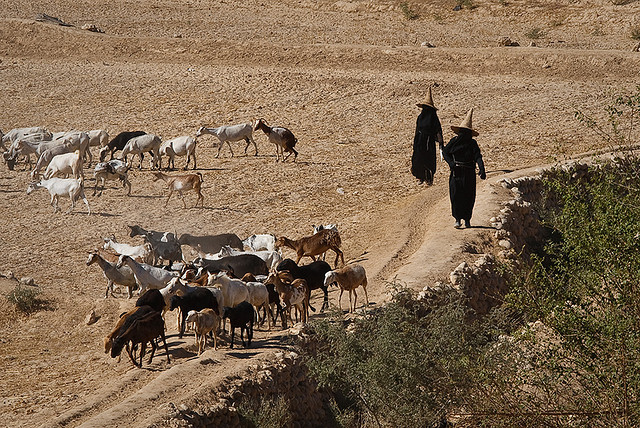 Hadhramout is dry and in most parts, water is scarce. The women tending goats have to look for the best parts where they can graze their flock, and at the same time make sure the goats have water to drink. These brave women, have to make sure too - that they herd only on lands and fields belonging to their tribes or where they have been allowed to. Normally, whenever these women are herding the goats, men aren't far away from them. In many cases, a man or some men would be discreetly watching from a distance making sure that the women are safe. In very remote areas - some of these women can drive very well in the desert or through the rugged mountains and valleys; and some are armed and are good at shooting. 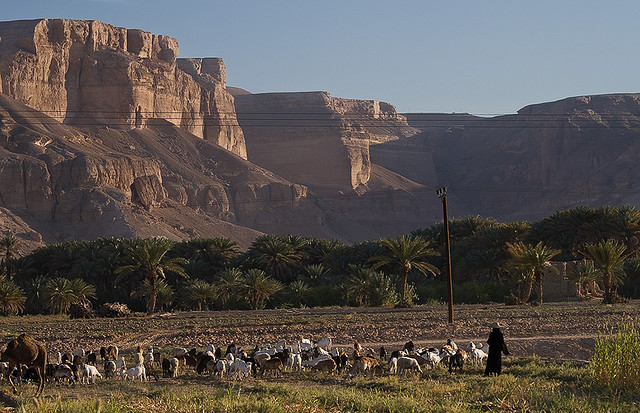 In Hadhramout, women who herd goats or who work in fields, generally, are much healthier and live much longer than those who have urbanized and taken modernity. They are always lithe and never fat. I know a few of these women in their seventies (one of who is said to be over ninety) who are still very healthy and strong; and herding goats. The one who is over ninety, has well-off sons, daughters, grandchildren and great-grandchildren - many of who living in Saudi Arabia and the Gulf countries; and yet she refuses completely to give up goat herding and her way of Bedouin life. Is my writing this - infringing on these women's way of life? As with most posts on Hadhramout, on this site, I write them to give a different, authentic perspective on life, people and issues in this wonderful, amazing part of the Arab world. My Homeland. 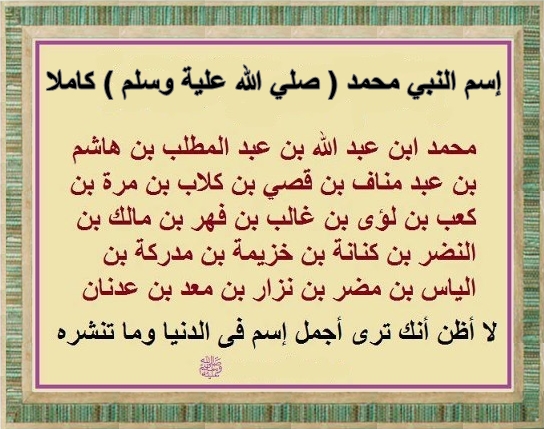